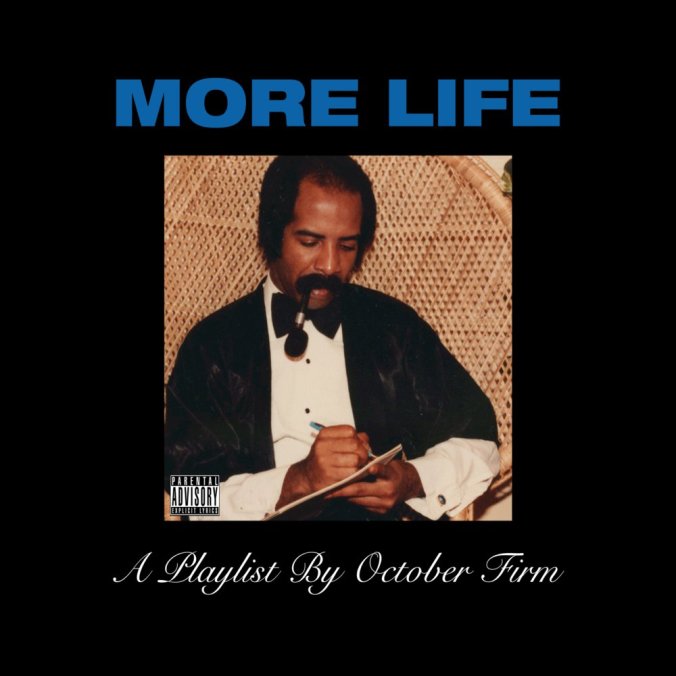 Remember, in 2012, when Green Day put out three albums within a six-month span?  Uno, Dos, and Tre had a total of 37 songs, and it’s widely regarded as one of the band’s biggest blunders.  Nonetheless, when you’ve been making music for over 20 years, you’re allowed to make a few ridiculous blunders.  The band will talk about how releasing so much music in such a short time span was a large mistake.  Drake should take note.  Drake’s past three solo releases have all clocked in over an hour each, and none are bearable to listen to in a single sitting.

Despite the long runtimes, Drake does know where to make the “playlist” hit.  “Free Smoke” is a great opening and “No Long Talk” is a fitting follow-up.  The production has a thick bass and a beat reminiscent of early 2000’s hip hop.  Drake and his collaborators all work off each other well.  Drake isn’t the greatest rapper, but he doesn’t falter from his stance that he is in either of these tracks.  “Passionfruit” is where the album begins to falter.  Despite a great beat reminiscent of “No Good,” Drake’s singing ends up feeling repetitive and dull.  It doesn’t really go to any adventurous territory.  It’s all played nice and safe.  It’s pleasant and familiar, but fails to bring any surprising, mind-blowing moments.  “Portland” is a hit in such a strange context.  It has the sort of braggadocios lyrics that the most fun raps are built on.  The chorus is irresistible, but the instrumental is based around a thin flute sample.  It’s easily the most intriguing thing Drake has done in his entire career. Drake picks up again with “Can’t Have Everything,” an atmospheric track that shows Drizzy still hungry: “I want everything.”  The title track is great gospel-rap.  Kanye’s feature on “Glow” is standard Yeezy in that it’s passable, but the Earth, Wind & Fire sample at the end makes the track.  “Do Not Disturb” is a nice reflective poem to end More Life, making this a well bookended album.

Drake’s talent lies in recruiting good producers for a listenable project.  The beats on More Life are usually the best part of the songs.  The songs themselves are not well-written or well structured.  They sound like they were just churned out of Drake’s studio for the sake of making a song to the sick beat.  Lyrically, Drake rarely strays above the “fine” descriptor.  He’s a fine rapper, fine singer, and fine lyricist, but not much better.  Unfortunately, there’s little hear that’s equally as catchy as the best moments on Views, another overrun album.  Drake can’t keep putting out these long 80 minute releases with a number of half-assed songs.  If he waited two years in between albums, maybe he could put out a focused long-work, but putting one out every year is starting to show his stunt in creativity.

More Life isn’t exactly Green Day’s trilogy, but it’s hard to think Drake could continue this prolific release schedule and retain critical respect.  He’s both growing up and burning out.  Despite being more mature, he’s slowly becoming blander.  The excitement of his early releases has gone, and maybe it’s better that he’s dubbed this a playlist rather than an album, but really, who’s he kidding?