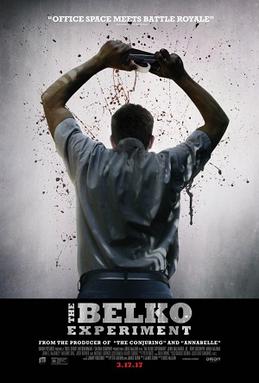 What is the point of setting Battle Royale in an office building if you’re not going to utilize office supplies as murder weapons?

The Belko Experiment is very short-barely 90 minutes long. That’s because it is exactly what you saw in the trailer and nothing more is added. Everything you think is going to happen does. There is no attempt to add a plot twist or alteration to set this film apart from Battle Royale, The Hunger Games, Exam, Cube, Circle, Lord of the Flies, The Killing Room or the dozens of other films with similar ideas and better execution. This is not to say The Belko Experiment is a particularly bad film. It’s passable. But I take issue with this because “let’s put people in a life or death situation and see how they deal with it for the sake of social commentary or entertainment or whatever” has become a genre unto itself because it’s so watchable and easy to write. Even if the film isn’t particularly memorable, a premise like this one will always be attractive to audiences. There are two main reasons for this: the self-insert ‘murder without consequences’ prospect (e.g. “which of my coworkers would I kill in this type of situation?”), and the easily palatable social commentary that essentially writes itself. This is why we, as a culture, love post-apocalyptic stories. They are simple and straightforward and easy to analyze by considering it within the context of the world we live in currently. And I’d be lying if I said I didn’t love movies like Battle Royale and Circle for the very reasons I just listed. But The Belko Experiment did not do it for me.

The stock characters that often appear in these movies were all present but they were somehow even less interesting than they might have been in a different movie. Featured among the very large cast are the good-natured protagonist who refuses to kill until the very end when he is inevitably the last man standing because it’s the only form of character development we are going to see (John Gallagher Jr.), the predatory sociopath who is secretly enjoying this (John C. McGinley), the love interest of the protagonist who will die in his arms in slow motion (Adria Arjona), the paranoid stoner (Sean Gunn) and the quiet intellectual (Melonie Diaz). And the running time does not allow the audience any room to be invested in any of these people.

This film might have worked if it was given to a better director- one who doesn’t rely as heavily on the “classical music played over slow-motion bloodshed” cliché. But a better director probably wouldn’t have rescued such a weak screenplay, with its paper-thin characters and painfully phoned in comic relief. The violence feels like filler. This movie would have been more interesting (or at the very least, more creative) if nobody had access to a gun. That blood-soaked tape dispenser on the poster did not make an appearance, and I am mildly disappointed.  Even with the occasional fun moments and decently built up tension, I think the only thing that might keep The Belko Experiment from disappearing from public memory is its premise. And if that’s what you’re looking for, there are dozens of films that do it better.