Traditionally, punk rock has tried to go against tradition.  While nothing seems more rooted in tradition and values than the Republican Party, there have been a number of punks to lean to the right.  Despite most punks denouncing the current GOP nominee, Donald Trump, there are definitely tracks here that you could enjoy no matter where you fall on the political spectrum. 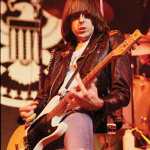 Despite this scathing criticism of Ronald Reagan, Johnny Ramone was a strict conservative, and he hated this song.  Johnny Ramone has been quoted as saying “People drift towards liberalism at a young age, and I always hope they change when they see how the world really is.”  Joey and Dee Dee Ramone are the authors of this catchy number.  Johnny Ramone’s guitar work isn’t as raucous as in more popular Ramones songs, but this is still a classic track, even if Johnny supported Reagan.

Fear-“I Don’t Care About You”

Fear’s biggest claim to fame is probably being banned from Saturday Night Live following their 1981 appearance on Halloween.  Their other most infamous appearance is probably at the end of Penelope Spheeris’ The Decline of Western Civilization, in which frontman Lee Ving harasses their audience calling them “fags” and “queers.”  Ving’s political stance has created conflict between him and past members.  Fear was still one of the most popular bands in the early hardcore scene, and “I Don’t Care About You” might as well be the official campaign song for Donald Trump’s Campaign.

Technically, Megadeth isn’t a punk band, but they are the most political of the Big 4 of Thrash.  Also, this is a Sex Pistols cover.  Dave Mustaine formed Megadeth in wake of his time in Metallica, and his highly political lyrics have always been a driving force behind Megadeth’s success.  Despite earlier lyrics having a distinctly left-leaning viewpoint, Mustaine has veered more conservative since 2004.  He’s been incredibly vocal against President Obama, and on at least one occasion (where I saw Megadeth), he closed out the night by saying, “Don’t believe them when they say, ‘Dave’s a right wing nutjob.’ Have a good night.”  Dave is, otherwise he wouldn’t be an Obama birther.

The Misfits-“Dig Up Her Bones”

Besides Johnny Ramone, Michale Graves may be one of the most famous republicans in punk.  Despite having more of a libertarian tilt to him now, Graves has been vocal about his views even as the lead vocalist for the punk-legends from 1995-2000.  Even though he never really delivered any classic Misfit tracks, “Dig Up Her Bones” is pretty good, and the best Misfits songs are apolitical, anyway.

This lesser known punk group have played Tea Party rallies, but this song is interesting.  As is the case with some punk bands, it’s hard to tell when they’re being sarcastic.  This song certainly is catchy though.  Bobby Steele was also an early member of The Misfits and is the only original member still in the band.  Regardless, a song that says “Fuck your laws” is punk as all hell.

Dave Smalley, who fronted the post-Descendents band All, has appeared to be a more right-of-center punk.  In some interviews, he preaches a need for both voices in punk, but he has also contributed to the website conservativepunk.com.  Smalley also has a degree in political science, so he may be the most informed person on this list, but I could always be wrong.  Regardless, this Allroy for Prez track is fun as fuck.  It’s an upbeat pop-punk track that sounds straight out of a Tony Hawk Pro Skater game.

This is a silly song from Hitler Bad, Vandals Good.  Bassist Joe Escalante contributes to conservative site Ricochet, but the band still makes silly apolitical punk that any fan of blink-182 could enjoy.

Check out our list of punk songs by Democrats!

James follows candidates from both major parties on Twitter.

2 thoughts on “7 Punk Songs by Republicans”