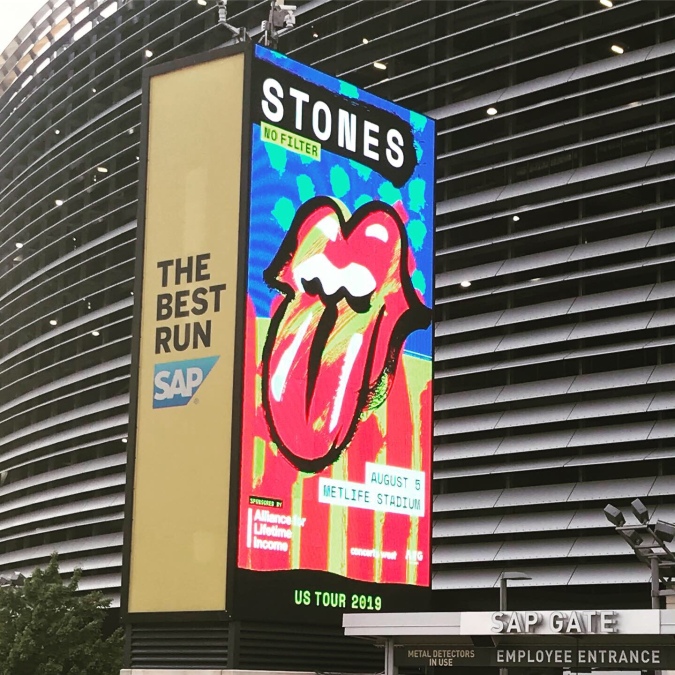 In Marc Maron’s 2017 special, Too Real, he recounts seeing a Rolling Stones reunion show and all his fears that it would be bad.  One of the jokes many twists is that almost immediately after the show started, Maron starts weeping in awe of seeing The Stones live.  While I was not as nervous as the WTF host on Monday night, I was certainly on the more reserved end of excitement in Metlife Stadium for The Stones’ No Filter tour, and, like Maron, I was absolutely floored by how great the band are fifty years into their career.
While there are many highlights in any given Rolling Stones set, none are nearly as electrifying as hearing the first few chords of “Jumpin’ Jack Flash” as the band enters the stage.  It’s been said many times before, but it’s easy to forget that each member of the band is well into their 70’s.  Mick Jagger struts with a level of confidence that many hard-rock frontmen wish they could pull off.  He only grew more comfortable as the band began to play “You Got Me Rocking,” which is when the largest epiphany about the Stones happens, which is that so much of their music is timeless.  “You Got Me Rocking” came out in the 90’s; “Start Me Up” was a hit in the early 80’s, and both are songs that fit just as neatly alongside their hits from the 60’s and 70’s.  They’ve had a real ass long time career.  Their music hasn’t changed all that much, yet it’s still managed to always be timeless.  “Gimme Shelter” sounds just as fresh, raw, and real in the days following a mass shooting, as it did when Jagger was commenting on the Vietnam war.  No matter how nervous or indifferent you are walking in, once you see and feel that energy radiating off the stage, it’s hard to not be engaged with the band.

The range of songs the band played serves as both a career retrospective, but it also allowed for some lesser-played songs for diehard fans to indulge.  The band has been doing an online poll where they have fans vote on a request song they want played each night.  On this particular evening, “Monkey Man” won the vote and was played alongside other deep cuts like “Dead Flowers”, “You Got the Silver”, and “Harlem Shuffle,” which was added only that night for the New York/New Jersey crowd.  The mix of songs seems to keep the band on their toes and engaged more than if they just went out and played the hits for each show.  Keith Richards seems thrilled to take lead vocals for two songs.  While certain staples were sorely missed like “Beast of Burden” or “It’s Only Rock N’ Roll,” there weren’t any clunky moments in the set that felt lacking.  Aided by many younger musicians, the band certainly still have chemistry when they’re playing.  Jagger seemed especially appreciative after undergoing a heart valve transplant, thankful to even be here and apologetic that the dates were moved around.
While The Stones of the 60’s couldn’t have anticipated the level of success and influence the band has now, there wasn’t a person in the audience at Metlife Stadium that didn’t know that.  While many artists could just coast off of this level of success, this run really felt special.  It may be because Mick, Keith, Charlie, and Ronnie are aware that it could be their last; it could be because Jagger is more in tune with himself following the surgery.  Hell, their shows could’ve always been like this anyway.  As long as they know they can, it doesn’t seem like The Stones will blow it any time soon.