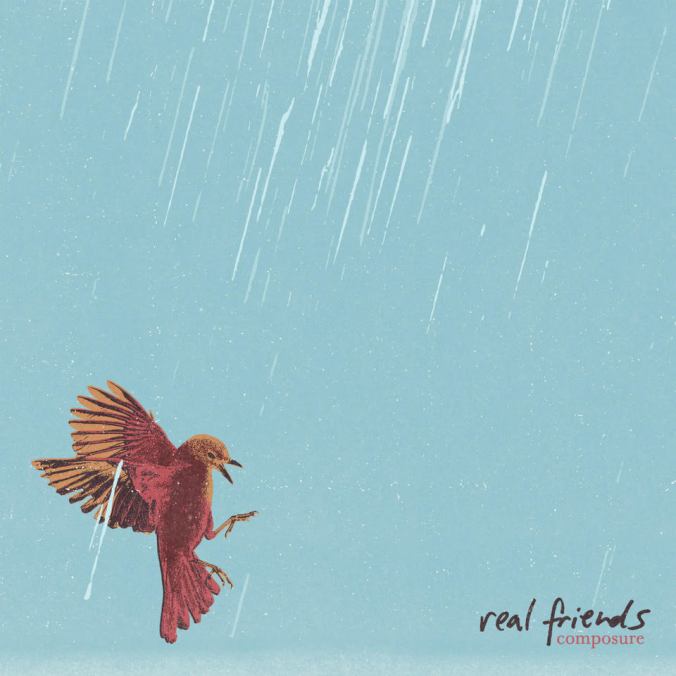 In “Stand Steady,” the second track off of Real Friends’ third full-length Composure, frontman Dan Lambton sings, “It’s good that I’ve grown.”  In pop-punk, Peter Pan-syndrome runs rampant, and records about growing will always be in vogue.  Whether they’re about resisting development or the difficulties of growing, this is a pop-punk standard, but Real Friends hasn’t really grown or changed besides switching up their charade.

It’s not uncommon for pop-punk bands to lean more into indie rock.  Look at some of Real Friends’ pop-punk contemporaries: The Wonder Years and Modern Baseball, both bands which made a crossover to a larger and/or more indie-leaning audience.  Real Friends seems to want this sort of crossover, but perhaps with a more indie-pop or pop-rock leaning audience.  The video for “From the Outside” sees the band’s attempt at a typical pop-rock summer jam video and song.  It doesn’t deviate from any of the themes that Real Friends have been known for.  The largest change is that the band has tried to flip from their typical downtrodden minor key sound to pepping up the depression jams.  Lambton’s screams sound out of place for the first time since the music is so upbeat.  Despite the slight sonic change, the songs are still very much rooted in the Midwest emo and pop-punk influences.  They haven’t really expanded, and they still sound like Real Friends without seeking differences.  The band sounds like a combination of Train and Neck Deep, while still having the standard Illinois sad boy theme.

What resonates the most in Real Friends has been the lyrics.  The band has in the past provided endlessly quotable faux-poetic lyrics, heavy on suburban and classic emo references.  Still, the band focuses endlessly on wallowing in a depression and complaining about women who have wronged them.  Heartbreak has always been a staple of emo lyrics, but Real Friends seem to have not outgrown their whiney can’t get a girlfriend-isms.  The album’s first song contains a chorus where Lambton sings, “Why don’t you put me first for once?”  It feels like airing out dirty laundry in the worst way.  The ballad “Unconditional Love” sees the narrator complaining about receiving just that-unconditional love: “You let me down, but you’ll never let me go.”  Even the bitterness of “Get By” makes me nauseous.  The chorus proclaims, “You’ll get by while I get better/Don’t hold on cause I’ll hold you back.”  This sounds like the type of jackass who would also call himself an incel.  The wallowing in heartbreak emo has been done so much better, rather than this resentful bullshit.

Real Friends suffer from a strange case of arrested development.  They seem to want to progress to a larger audience than what their scene can currently provide, but they do very little to actually escape the tropes of the genre they play.  They’re still singing about girls, and they just flipped their minor-key mathy pop-punk to a major-key.  They’re enough to get by, but I doubt they’ll get better.