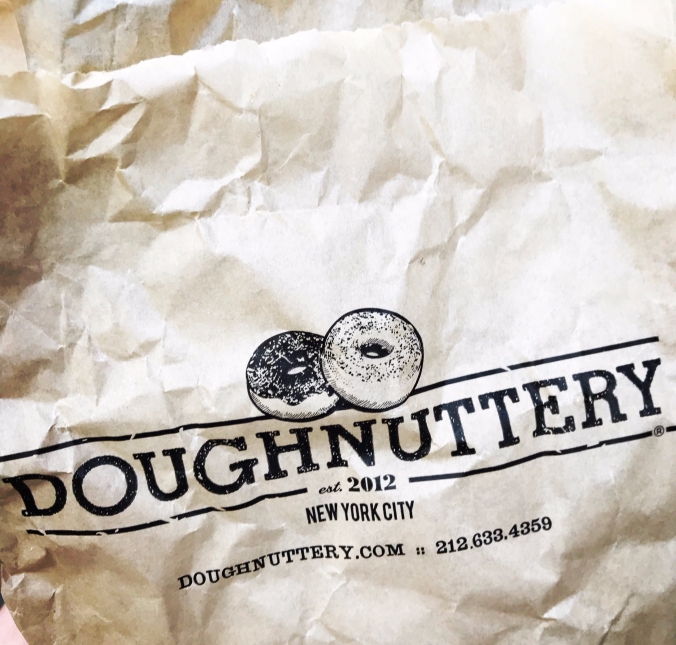 Who doesn’t love a good doughnut?  Generally, doughnuts are a failsafe food.  Whether you’re grabbing a quick glazed donut from Dunkin’ Donuts or a vegan, apple, chocolate frosted with candy corn doughnut from your latest hipster coffee shop, you’re probably going to be satisfied.  Still, there’s a fine line between satisfied and happy.  That glazed from Dunkin’ is probably going to satiate, but that franken-doughnut sounds pretty damn good.  I was totally satisfied with my six mini-donuts from Doughnuttery, but I wouldn’t say I was really happy.

Doughnuttery offers mini donuts in increments of six-$1 per doughnut.  They offer a variety of flavors-one flavor per three doughnuts.  I opted for the Pumpkin Pie Brulee and the Paris Time flavors.  The doughnuts are then placed in a bag with the corresponding sugar, shaken up, and served.  It’s solid for offering a wide-variety of flavors, and there’s a rustic chic to seeing the doughnut maker front and center.  That being said, the quality really isn’t there.

The qualities of the doughnuts were good.  They had a good fluff and powdery surface, but using the sugar powder to give the doughnuts flavors isn’t a good approach.  Both were indistinguishable from each other.  Each was fine, but neither provided a flavor that really tickled my sweet tooth.  Maybe some of the other powders provide more flavor, but I was really discouraged.

While the flavor was weak, it was occasionally there.  There were hints of vanilla, cinnamon, and pumpkin.  Doughnuttery is a great snack for anyone with a large group of children.  Each child can pick a flavor, and they can get three doughnuts in that flavor.  I wouldn’t aim for much else though.