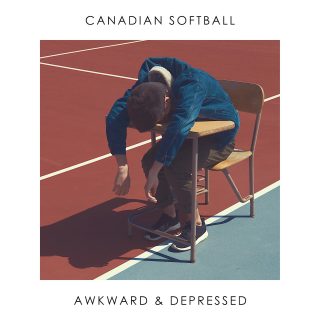 Hey, remember being in middle school and taking everything as a personal attack because puberty is probably the most personal attack anyone can ever receive? Ever want to relieve those feelings of awkwardness, unspent rage and rapid-fire mood swings that left your parents looking longing at military schools? No?

Too bad because Jarrod Alonge’s satirical album Awkward & Depressed captures the nostalgia of the pop-punk you used to “save yourself” and points out just how silly it could be. Sounds ranging from the impossible to understand “Mumble,” which plays off the quiet and hard to understand lyrics heard on some of the most famous pop-punk albums (Fall Out Boy I am openly staring at you) to “Great Again,” an ode to all the idiots who want Americ to be like 1953.  It’s a smart album, and if you are a pop punk lover to the point where you are known for saying “have you heard *insert random band here*?” (like the editor of Burger-a-Day), then you can appreciate what Alonge is trying to do here.

While this parody album stands alone in this portrayal of the pop punk genre, I can’t help but compare Alonge to Bo Burnham. Both are musical comedies but while Alonge focuses more on the musical aspect, Burnham is just funnier and much easier to listen to as someone who is more of a comedy fan than a pop punk expert.  Listening to Awkward & Depressed felt like a commitment because I couldn’t just listen to the music and the jokes, I had to sit down and focus on both which is not how I want to appreciate my comedy music, or any music for that matter.  I like background music to my day and I couldn’t do this because I was waiting for jokes that didn’t come in the traditional sense. Alonge’s song “Mathematical” was enjoyable for me because it actually stopped focusing on the music and instead focused on the comedy side of songs and because of this, I would only recommend this album for people who truly know pop-punk, and can appreciate Alonge’s focus on the musical aspect of his comedy.  It was alienating to try to listen to the album that didn’t feel enjoyable but I knew in my heart I was suppose to laughing at.  “Ohio is for Emo Kids,” “Great Again,” and “Your Validation” shined in this way because they were part of a handful of songs that were more focused on making fun of mainstream pop-punk.

Overall, while I wish Alonge’s music had been more approachable for the pop-punk novice, I can understand that the album wasn’t for me.  It is for all the people who were way more EMO than me in middle school and went even further into music during their “no one understands me and I hate 7th grade” phase and I think they will be able to enjoy it.