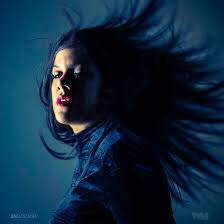 BurgerADay:Your sound on Vine is drastically different from Mouth of Mars. It’s a very Bon Iver-like switch to go from a very organic folk sound to something much more ambient and electronic. Why did you make the sudden shift for this album?

Jen Gloeckner: When writing a record, I always strive to paint a new picture from song to song. Sticking with the same sound from record to record, or through a record seems a bit boring to me.

BAD:The flutes on “Blowing Through” are one of my favorite touches. There are a wide array of instruments scattered throughout the album, and each fits perfectly. Do you play all the instruments?

JG: I do play and program most instruments, maybe 85-90%. The flutist on that song was Jen Wiater, and good friend of mine. I also had a cellist play on several songs, a drummer on a few things, and a couple different guitar players added some tracks as well.

BAD: You haven’t toured behind Vine yet, but if and when you do, what do you think your set up will be? Full band? Acoustic? Laptop?

JG: It is hard to say right now, until I start getting ready for that. But a cellist is always a must when I play live. I would probably also want a drummer and another guitarist.

BAD:You mentioned in an interview with Popdust that you recorded Vine in your bedroom and through a case of sciatica. Do you feel that either had an effect on your songwriting process? Is it reflected in the lyrics or sonically?

JG: Yes, most definitely. I always record my records at home, so that aspect did not really change, but my state of mind from the sciatica definitely had a big impact on the record. I couldn’t move around much for a few years, so a lot of self reflection took place during that time. I think it had a big impact both lyrically and sonically.

Again, in the Popdust interview, you mentioned that “The Last Thought” was written while you watched the dance scene in House of Flying Daggers. Did the actual song from the scene influence “The Last Thought”? Or, was it a mute the TV and score the movie yourself sort of move?

JG: Yes, exactly, I had the volume of the movie muted and created my own soundtrack for a scene.

BAD: A number of the songs on Vine resonate, because there’s such a large amount of emotion put into it. “Counting Sheep” and “Firefly” stand out to me personally. Is there any one song that was particularly emotional or cathartic for you? Why?

JG: “The Last Thought” has something a little extra special to it for some reason, but not sure why. Maybe it’s because of the different approach I used to write the song.

You’ve mentioned in a few interviews that you’ve already begun working on your next record. How long does it typically take you to write a new album? Can you give us any insight into Vine’s follow up?

JG: I usually take as much time as I need, and let things simmer for awhile. But because of all the time lost through the sciatica issue, I do feel a need to get another record out, hopefully early next year, but we will see. As far as the sound on the new record, it is really hard to say, because that usually starts to come together in the last month or two of the process, when I am more in producer mode.

Jen Gloeckner’s Vine is out now.