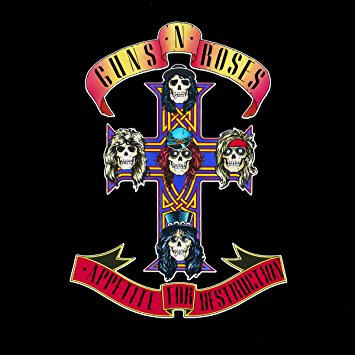 I’ve never known a time when Guns N’ Roses weren’t one of the biggest, most important rock bands of all time.  I was born in 1994, right before the band dissolved into the Axl and company show that they were for most of my life.  The first time I ever heard GN’R was about 12 years ago, at my cousin’s baptism.  An older cousin lip-synced and air-guitared to “Welcome to the Jungle,” a song that I’ve always had a shifting perspective on.  Living in a post-Guns-Reunion world makes the 30th anniversary of Appetite for Destruction that much more bizarre.

Appetite has a number of places that are good starting points to talk about, but maybe the songs that haven’t aged as well are probably the best place to start.  “Out Ta Get Me,” “Think About You,” and “Anything Goes” show some of GN’R’s follies.  Sometimes they over-stuffed their albums with a few too many songs, which would also explain Use Your Illusions.  These three tracks are the only hindrances that keep Appetite from being a perfect beginning to end album.  There’s not really much wrong with any of these songs, but these are the vapid pop-songs but had Appetite just been songs like these, Guns would be lumped in with the rest of the shitty versions of Van Halen. 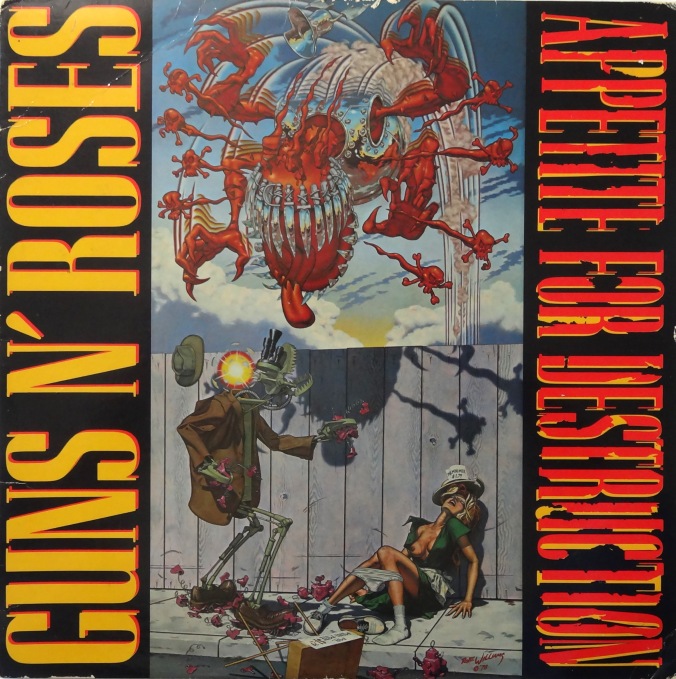 The rest of Appetite is strange to look at the perspectives that I went through.  Upon first hearing, “Welcome to the Jungle,” it didn’t really strike me as more than a badass rock song.  I was ten, and the only edgy thing about it was when Axl mutters, “You’re a very sexy girl.”  I had a similar feeling with “Mr. Brownstone,” not realizing that it was a heroin reference.  When I listened more intently through my mid and late teens, I realized how much more daring of a song it is lyrically.  Axl may as well be Mick Jagger in the opening lines of “Sympathy for the Devil.”  He’s seductively drawing people into the jungle the same way he was.  It’s still such a rocker that you can barely even complain that it gets overplayed.

From both a lyrical and musical point of view, the only word to really describe Appetite is badass.  Slash can churn out riffs that require a strut with the headbang.  Duff McKagan’s bassline on “It’s So Easy” and Steven Adler’s drumming on “Mr. Brownstone” show the massive, Zeppelin-sized greatness that GN’R encapsulated in the late 80’s.  Izzy Stradlin’s rhythm playing is what truly makes “Rocket Queen” the gigantic song that it is.  Axl’s lyrics and vocals are the cherry to what was already a hardcore album.  It’s impossible to put on a song from Appetite and not feel like a badass during the first few measures.  Even if it’s the light arpeggios of “Sweet Child O’Mine,” there’s always going to be a part of you that wants to dig a greasy comb through your hair, light a cigarette, swig a bottle of whiskey, and hit the town.  It’s not advisable to listen to Guns before going to work in the morning.

Nonetheless, if it weren’t for the frontman, we probably wouldn’t be discussing this album.  Axl was batshit insane from Guns’ start, and it seems he’s only calmed down within the past year.  That’s 29 years of crazy, but what would you expect from a guy who shrieks, “You’re fucking crazy!” on his debut.  Even when Rose doesn’t have his signature, Axl grit to his voice like on most of “It’s So Easy,” he almost always sounds like he’s on the verge of kicking someone’s ass.  He shows that he can when he screams like on the chorus of “Nightrain.”

Axl also had the poetry to back up his snarling vocals.  The chorus of “Paradise City” remains to be one of the best in all of history.  It’s the type of braggadocios that someone like Kanye could only dream to imagine.  Axl is truly a master cocky lyricism.  No one has ever sounded cooler than Axl squeaking, “I smoke my cigarette with style.”  He’s a frontman that truly lived the life of a rock god and wasn’t afraid to be brutally honest.  “My Michelle” is the perfect example.  What should have been a love song opens with:

now that mommy’s not around.

She used love her heroin,

It’s lyrics like this that make you realize that Axl probably isn’t lying in just about everything else he sings, and the real darkness, violence and gratuity of this album is what makes it.  Even on the ballad “Sweet Child O’Mine” it can get pretty grim, and Axl lets himself get vulnerable.  “Rocket Queen” is the perfect summation for the album to close on.  It’s seductive, heavy, and sweet.  It opens with Axl teasing the titular woman, assuring her a good time.  Then, you hear Rose fucking Steven Adler’s girlfriend on the bridge, but it closes on a kind, gentle moment.  Through a loud riff, Axl belts, “All I ever wanted was for you to know that I care.”