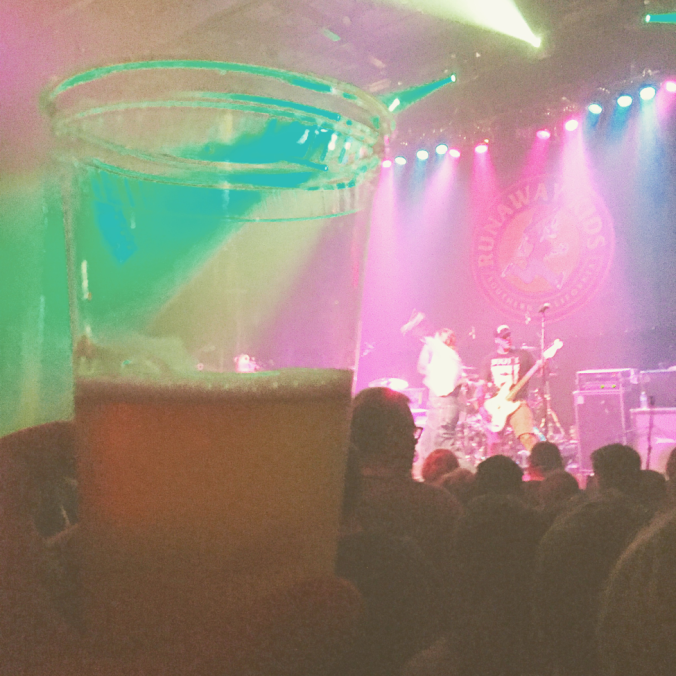 “I don’t go to Brooklyn,” Casey mutters anytime I propose a show in the King’s County borough.  “We should see a show soon,” is a phrase Casey says to me about every two weeks.  When scrolling through events on Facebook, I saw both Bowling for Soup at the Gramercy Theatre and Diet Cig at Baby’s All Right on a Friday.  Casey initially agreed to Bowling for Soup, and when I proposed catching Diet Cig’s late show for their record release of Swear I’m Good at This, she was down to do both in a night.  We managed to hit both shows and it was a hell of a shit show.

After seeing John K. Samson of The Weakerthans on April 5th and planning on seeing Lotus on April 8th, the double header of shows wasn’t exactly my par for the course.  Especially getting from one venue to the next, across the bridge.  Casey and I opted to begin our night down the road from the Gramercy, getting dinner at Schnippers.  After a quick pregame bar hop around the theatre, we got into the Gramercy right before Direct Hit went on.  Both Direct Hit and Runaway Kid are reminiscent of 90’s pop-punk like NOFX, fast, kind of funny, and not for everybody.  Neither were particularly mind-blowing, but fine in hyping up a crowd of what seemed like a bunch of drunk, nostalgic college students.

Bowling for Soup honestly let me down.  The first thing Jaret Reddick uttered onstage was “No, I did not eat the lead singer of Bowling for Soup,” which would have been funny.  He’s gained weight, and if the band launched into “My Hometown” immediately after that statement, it would have been a light, funny jab.  Nonetheless, the band continued to joke for what seemed like an eternity, before even playing their first song.  This created an issue for Bowling for Soup, their show didn’t gain momentum, because they kept breaking for jokes.  When BFS plays, they still sound great.  “Ohio” and “Emily” were both spot on, and Reddick pulled out some of his standard stage moves, but the joking in between songs was nearly unbearable.  We left after “High School Never Ends,” and even though we missed some late set gems, it seemed the hits were few and far between.

After recuperating in an Uber to Baby’s All Right, we entered the venue as T-Rextasy began their final song.  The energy in Baby’s was a little bit more varied than Bowling for Soup’s.  It seemed like there was a mixture of high school and college students as well as a few young adults.  Also, Alex Luciano and Noah Bowman’s mothers were both side stage once the duo took the stage.

Despite having a hard curfew at midnight, Diet Cig sped through their set with a level of excitement that showed how special this small Brooklyn show was.  Opening with Swear I’m Good at This’s first track, “Sixteen” it seemed like most of the audience was already very familiar with the album despite it being release day.  The band ripped through album highlights such as “Barf Day” and “Maid of the Mist,” and sprinkled in some of their best singles and tracks from Over Easy like “Sleep Talk” and “Scene Sick.”

Alex Luciano and Noah Bowman are like Yin and Yang.  Bowman is very concentrated in his drumming.  Luciano runs around the stage with the energy of a sugar high child, always kicking a leg up over her head.  Luciano rolls her eyes on choice lyrics like “sorry, my town sucks.”  She never misses a beat while showing every emotion that the songs reflect on her face.  This is important, because Luciano’s lyrics are like speaking to one of your goofy college friends.  She’s really expressive and funny, but she can turn dead serious in a heartbeat but just as quickly crack a joke write after.

As the show ended, Luciano introduced both Bowman and her mothers, and as they launched into “Harvard” to close the show, the stage was flooded with mothers, children, members of PWR BTTM and seemingly so many of the band’s friends.  It was a celebratory night, which ended with a large scream along of “Fuck your Ivy League Sweater.”

2 thoughts on “Bowling for Cigs: Bowling for Soup at the Gramercy Theater//Diet Cig at Baby’s All Right: (New York/Brooklyn, NY) 4/7/17”