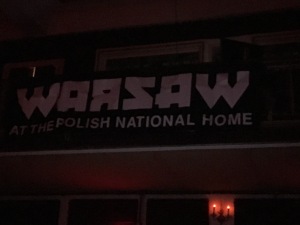 One of my favorite songs by The Wombats is “Techno Fan” and while they were not playing, nor were involved in this show in any way, this is the song I had stuck in my head all day before the show. “Techno Fan” tells the story of a guy who goes to a techno show, without knowing the music beforehand, with a girl he’s into and how being in the right place with the right person makes him a fan.

Enter Tim, who on Saturday mentioned the XXYYXX show at Warsaw. Being new to the city, I figured it was about time I made my way to my first show. To preface, while I love concerts more than most things, I had never been to an electronic show. I had no idea what to expect and went in open to whatever the night was going to bring.

During the break, I took in the crowd around me. While almost everyone was twenty-something, there were so many different kinds of people. While there were a lot of thick rimmed glasses, button ups and jean jackets, there were people from every scene. And while music brings together different people for the same purpose, there was something different about this crowd. Maybe because it’s my first show in New York, or maybe it’s because electronic music is accessible to so many different people.

The second opener, Beshken, was my favorite of the night. Beshken is a mysterious performer. With psychedelic projections and a multitude of instruments and guests, he falls into the more experimental category. He had a bassist on stage most of the set, but the real crowd pleaser was when he featured a voice artist who impersonated the trumpet. Beshken’s set made you think and expand what electronic can be defined as. The best song of the set was “Restless Earth”. 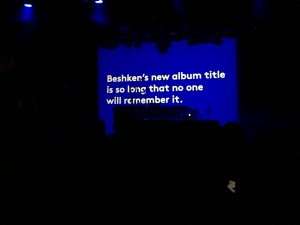 Finally, after a long, long break, XXYYXX came on to a screaming crowd. The twenty one year old out of Orlando didn’t say much during his set yet took up the whole stage. He broke his silence to break up a fight and to say his thanks. He kept the crowd entertained, intermixing slower tracks with fast paced dance songs, sampling across genres, including Spice Girl’s “Wannabe”. The crowd kept the energy high with everyone dancing through the whole set, ebbing and flowing with each build up and drop.

So, it was a success. My first electronic show definitely opened me up to a new genre of music. From this limited sampling I got to see how three guys from across the country take a label and bend and shape and mold it to who they are. But the best part, hours of non-stop dancing surrounded by people having a good time.