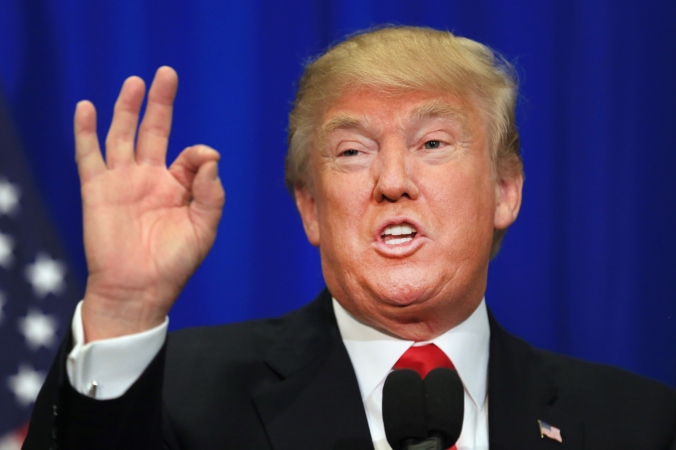 In 1964, the U.S. presidential election was between Democratic candidate and incumbent Lyndon B. Johnson, and Arizona Senator Barry Goldwater representing the Republican Party. Senator Goldwater faced a lack of support from within his own party, attacked by both sides as a dangerous and radical extremist. Johnson won the election in a massive landslide, winning 44 states, and the largest gap ever in terms of popular vote.

In 1980, the U.S. presidential election was between Democratic candidate and incumbent Jimmy Carter, and California Governor Ronald Reagan representing the Republican Party. A third candidate, Republican Congressman John Anderson, ran as an independent as once again some within the Republican Party considered their candidate too extreme. John Anderson took 6.6% of the total vote. Carter tried to run his campaigning attacking Reagan as a dangerous, radical, warmongering candidate. Disappointed with the current administration under Carter, Reagan campaigned successfully off depicting a negative image of the country’s current state, and fed off the American people’s fear. Modern day Republicans look at Ronald Reagan as one of their top presidents alongside the likes of Abraham Lincoln, as he sparked the Reagan Revolution, which changed the course of the Republican Party to what it has become today (until Trump, at least).

In 1988, at the end of Ronald Reagan’s term, a historical presidential trend was broken. The two candidates were incumbent Vice President George H.W. Bush for the Republican Party, pit against Democratic Massachusetts governor Michael Dukakis. Since the modern day law of presidents not being able to serve more than a two term max has been in effect, we have never had a political party be in control of the White House for more than 8 years, until this election. Bush won 40 states to Dukakis’ 10, 53 percent of the vote to 45. However, Bush Sr. lasted only one term, which then gave way to Bill Clinton’s next 8 years in office.

I mention the 1988 presidential election because it shows that in every election before and after, excluding FDR’s tenure, Americans always find something to be discontent with in their nation. After four or eight years of discontent with whatever it is, the American people want change. With the contentment of LBJ’s presidency in 1964 and agendas like his war on poverty, along with the fear of Senator Goldwater’s extremism, the American people chose to go the route they already knew, and deemed best for the country’s interests. In 1980, with their disappointment in Jimmy Carter’s presidency due to high unemployment rates along with the Iran hostage crisis, the American people opted for change and chose what some deemed as the radical extremist in Governor Reagan. In 1988, for the first time ever, the American people were content after eight years of their current president and decided to vote the same party again and vote for Bush, only to change course four years later and opt for Clinton, after Bush had ran his 1988 campaign on “Read My Lips: No New Taxes”, only to see the Democratic-controlled Congress implement and raise taxes during Bush’s term. And of course, after Clinton’s two terms in office, the country switched leadership party for Bush Jr., who would win a second term, and then switched again for Obama, who would win a second term.

Which brings us to 2016, where after eight years of Obama, the American people have spoken. Many have expressed their discontent with the current administration: Obamacare, trade regulations, immigration policies, and plenty of other hot topics. The nation has decided to opt for the party currently not in control of the presidency, in hopes that this change will change their pessimistic view of the nation, which some deem as “making their nation great again”.

My point is this: America has always been great. And as Clinton repeatedly said, we are stronger together. Stronger when we are united as a country. And in 2020, when the next presidential election rolls around, we can express our discontent, or express our happiness with the nation’s place in the world. We can change how the state of our nation will be at the time, or keep it if we please. That is what makes our country great, and what other countries unfortunately cannot do. Although often drawing comparisons to Hitler and other past dictators in this world, one thing I can promise you that Trump cannot do that they did, is remain in office whether you like it or not.

I did not vote for Trump. I did not, and still do not, believe this man will drive the country in the direction I believe is best. I could be wrong. I could be right. Trump cannot, and will not, single handedly ruin this country. We are not “doomed” as many have claimed we will be, with Clinton or Trump in office. Could we regress a few decades in terms of the progress we have made? Absolutely. But in four or eight years, the people of this country will speak again, and if Trump is as bad as we all have feared, we will rise as a nation and change course.  Or, if the country’s economy and society booms, and we are content with the nation’s standing, we can remain with the Republican Party, whether or not the commander-in-chief is Donald Trump. Wherever our country may be headed, our nation will be greater than ever before. We have a very diverse nation, with many conflicting views amongst us. However, each and everyone of our voices matter and is heard, as seen from the other polar opposite end in the liberalism movement sparked by Vermont senator Bernie Sanders in this election cycle, or the strong Democratic bases’ discontentment with his opponent Hillary Clinton could possibly be heard in the sole fact that Donald Trump won, as protest votes, which did in fact matter, as they altered the outcome of the election. That is the beauty of this country, and why I am proud to be an American.